Winner of the 2019 Winter Stations Competition in Toronto, Canada, Above the Wall was a critical work that contested Donald Trump's proposed border wall as a productive assertion of sovereignty. The installation positioned humans, physically and symbolically, above a barrier constructed around the lifeguard stand at Lake Ontario’s Woodbine Beach. 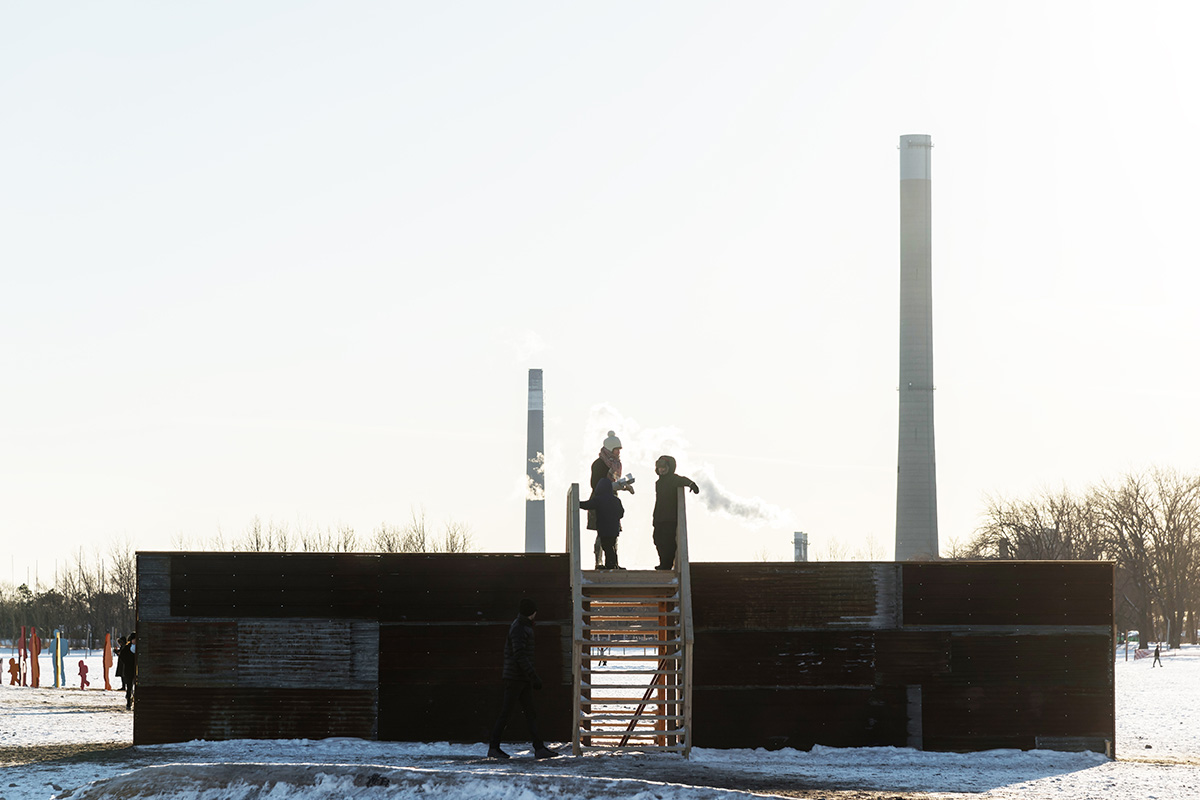 As featured in Dezeen and Archdaily, Above the Wall was a response to the global political climate of the Trump years, when the idea of a wall as a literal physical boundary between countries reemerged as a nationalist tool to prevent migration. As a means to highlight the need for diplomacy and humility around the subjects of borders and immigration, this installation created opportunity for conversation and transcendence. The elevated position offered perspective on the porosity of physical borders and provided a contemplative view to the lake.

As visitors walked the beach, they were encouraged to ascend the staircase and engage with others who had approached from the opposite side. Plural’s partners Adelle York and Josh Carel did just that, meeting with Toronto Mayor John Tory at the top and discussing the installation's cogent message. Unifying experiences like this one brought visitors closer above a physical barrier that was meant to divide.

When Above the Wall debuted alongside three other installations in 2019, Toronto’s design community warmly welcomed all of the winners to town. Plural presented on their work at a brewery event, met the other teams for brunch at one of the organizer's homes, and ended up exchanging numbers with some of their fellow designers from across the international community. The other winning installations also reflected on migration, but from different perspectives. “Forest of Butterflies” out of Xalapa, Mexico paid tribute to the monarch butterfly, which boasts the longest migration pattern in the world, ending in Michoacan. “Cavalcade” by a group of Toronto designers positioned colorful cutouts of human figures in motion, with possessions in hand, around a mirror. “Mind Station,” the brainchild of a design team from Warsaw, pushed the concept into experimental territory, inviting users to enter a hollow structure, poke their heads out of the top, and “lose their physical dimension.”

The international representation was fitting, given the contest’s theme. Plural was delighted to forge bonds oblivious to borders, and proud to articulate an egalitarian counterargument to the ethnocentric, discriminatory message that was then propogating from its home country’s federal offices. A few weeks later, serendipitously, Above the Wall became the site for an art-based Canadian Citizenship Ceremony, at which 27 new Canadians were sworn in from 14 different countries. The question Above the Wall posed by implication was, “Do walls work?” The progression of the event, and Plural’s involvement in it, answered with a resounding no.

Winner of the 2019 Winter Stations competition