Since its opening in 2015, the Mary K. Chapman Rhino Reserve at the Tulsa Zoo has become home not only to a crash of white rhinos but also to springbok, warthogs, nyala, and grey crowned cranes. That’s a testament to the exhibit’s environmentally sensitive design, which employs sustainable features and creates safe spaces for interspecies interaction, all while remaining conscientious of its contexts. 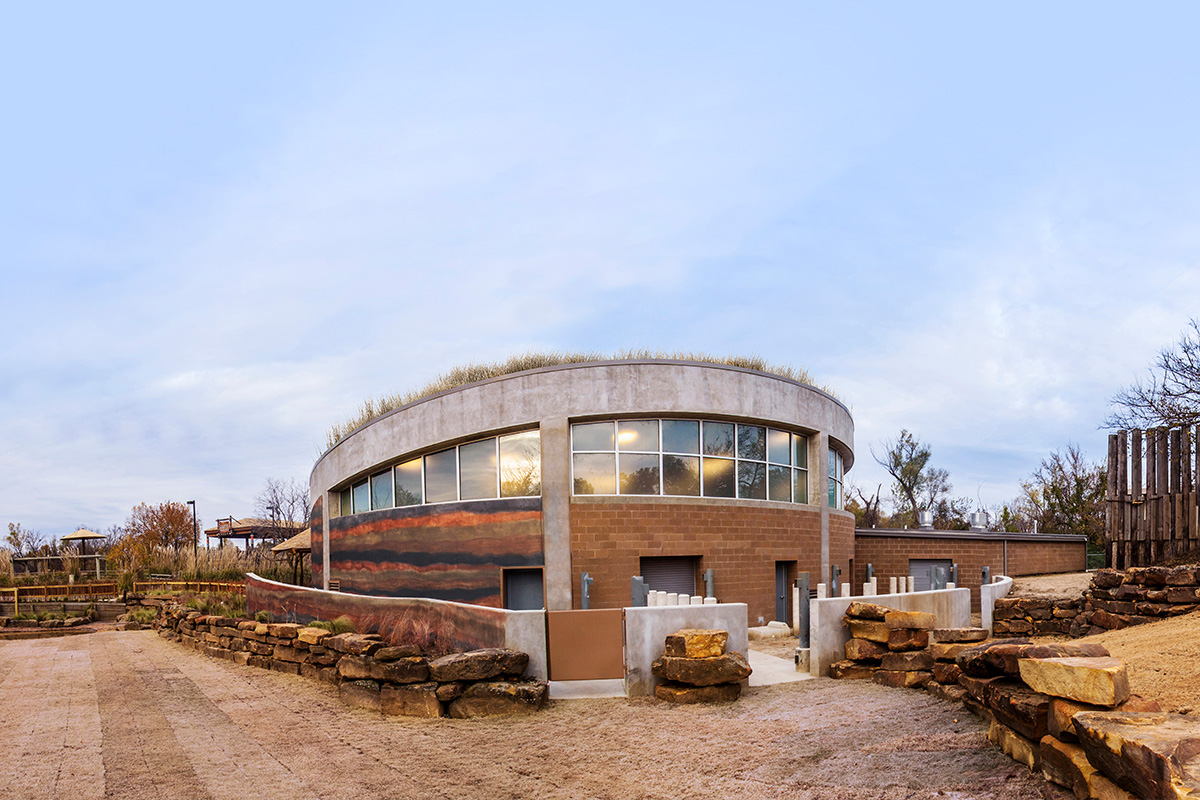 Out on the grounds, wallowing ponds, stacked stones, and fallen limbs partition off spaces where the animals can congregate and roam. This outdoor area, many acres in size, simulates the conditions of the African grasslands using flora native to Oklahoma, and is ample enough to accommodate antelope that can reach speeds of up to 60mph. The organic divisions between each zone are high enough to create a sense of separation, but low enough that some of the lighter, more agile species–like the springbok–can clear them when they need space.

The primary barn is the distinguishing structure on the reserve. Its cylindrical exterior is clad in rammed earth–layers of soil lifted from the ground and compressed atop one another to form a manmade geologic pattern–which reflects the surrounding habitat and nods to the built environment on the African savannah. Native Oklahoman plantings sprout from the green roof, which helps with heat dissipation and stormwater management. Additionally, the roof’s slope facilitates rainwater collection by guiding precipitation into a cistern below.

The roof itself, composed of a massive post-tensioned concrete slab, is a feat of engineering. The beams that undergird it are positioned such that no interior columns are necessary–all support is provided around the perimeter. This design allows activity on the ground floor to flow without interruption from structural elements. It also grants unimpeded entrance to natural light through the clerestory windows above, which, in conjunction with the heat that emanates from the radiators overhead, ensures this care facility is as comfortable as possible for the animals it services.

Relocating rhinos to a new habitat is no easy dance to choreograph. It takes zookeepers months to train the animals to enter crates that can be loaded onto trucks and transported–even for a mere move across the zoo–and once they arrive, safe distance must be maintained between rhinos, and between rhinos and humans, while the animals acclimate to their new home. The barn’s interior, which employs a series of chutes, gates, and concrete bollards, is mindful of these considerations. It’s a space where humans can safely administer vital veterinary care, and rhinos can begin to form bonds.