Family figures large into the design of this cabin, which sits on the banks of one of Minnesota’s 10,000 lakes. It finds inspiration in a kindred structure on the opposite shore, designed by the late Chicago architect James Nagle—the godfather of one of this new cabin’s owners. As the gabled wall of windows on the northern facade proclaims, the view to the water is a priority for this single-family residence, but ultimately it’s in service of a higher one: creating a space where loved ones will enjoy gathering. 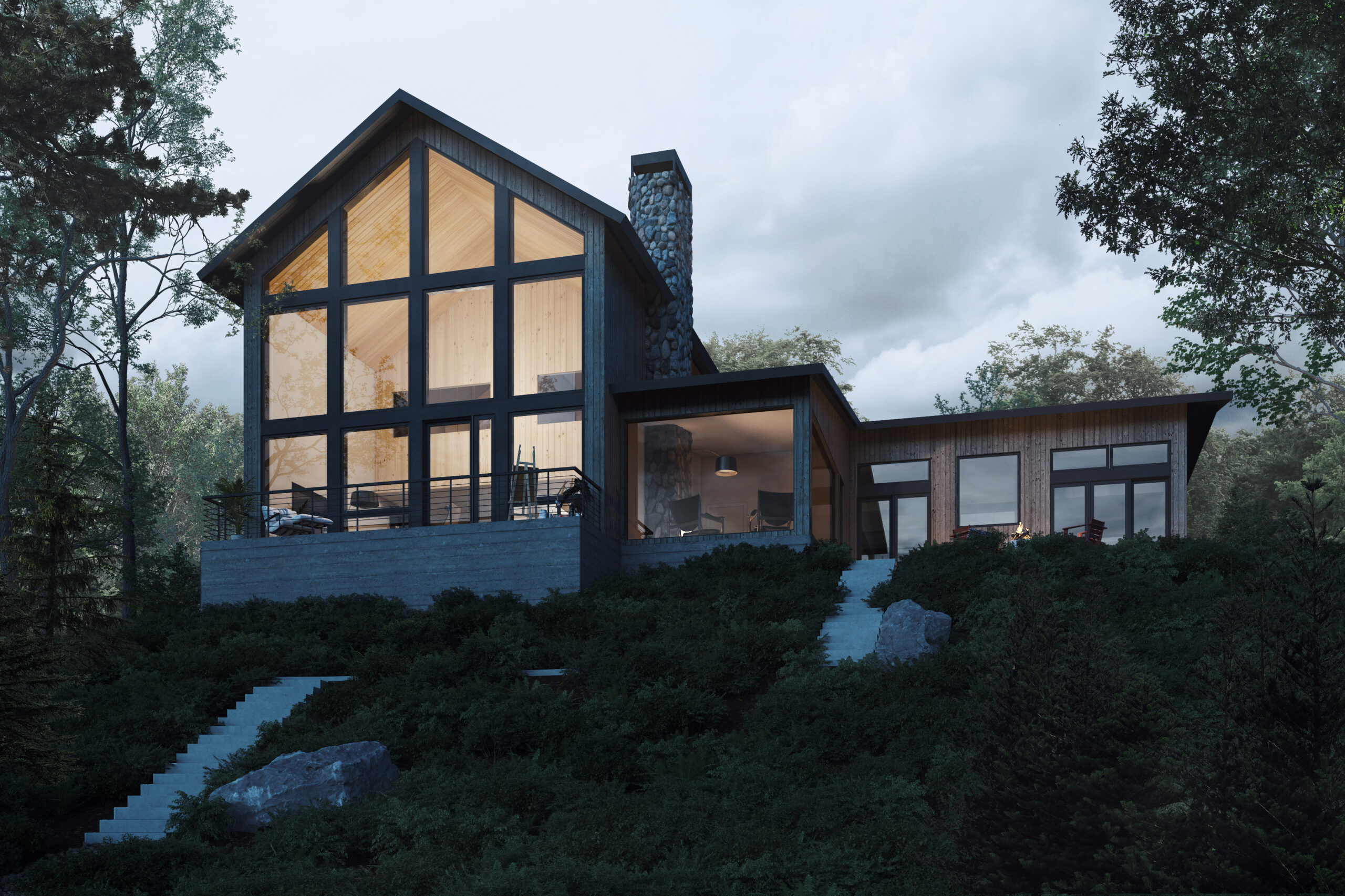 The structural elements that allow for floor-to-ceiling glazing on the lake-facing facade are moment connections: custom steel plates that join the vertical columns and horizontal beams around each window. Behind the windows, maple plywood clads the walls and ceiling of the open living and dining area, which reaches two stories, to the apex of the house’s gabled frame. Looking back toward the rest of the home, the living area flows on the east side into the entrance of the primary suite—an atypical layout, but one which allows the owners of Minnesota Retreat to weave their daily routines into the bustle of the house’s social activity. On the west side, the dining area opens to the kitchen.

The partition that separates these rooms is multifunctional. In the bedroom, it’s the western wall. In the kitchen it’s a wall, too, but there it’s also embedded with slate blue cabinetry, nodding to the interior palette’s Scandinavian inspiration, and representing an economical use of space that speaks to the owner’s sensibilities as a sailor. Its third function is to provide support for the second story, an enclosure within the overall enclosure that contains its own bedroom, bathroom, media room, and living area.

This design strategy of implementing elevated, enclosed spaces within larger spaces repeats on the west side of the house, behind a screened patio that faces the lake, in the Jack and Jill bedrooms. There the function is to house ductwork and vents, and to refract natural light flowing in from the clerestory windows. In both cases, the design sees Minnesota Retreat finding elegant solutions to practical problems.

Minnesota’s climate, which can reach temperatures as low as negative forty-five degrees, posed additional challenges. One was comfort, which is why the cabin’s high-performance windows are triple-paned, and its walls employ both internal and external insulation. It’s also why the cabin makes use of three fire elements: a woodstove in the living area, a gas fireplace next to the dining table, and out on the patio, a woodburning fireplace that extends into a stone surround chimney.

The other challenge was resiliency. Cold is hard on structures and humans alike, but the use of insulated concrete form foundations prevents cracks and ensures integrity, even under winter’s duress. The wood that clads the cabin’s exterior has also been thermally modified, which increases its longevity. Material selections like these—as well as the granite that composes the steps from the cabin’s patio, through the surrounding pines, and down to the lake—instill confidence that Minnesota Retreat will be around for friends and family, just like the cabin that inspired it, for decades and generations to come.