In the spring of 2022 Plural collaborated with the Houston-based design firm Dept. to conduct a planning study of the Main Street corridor in Bertram, Texas. Together, the team identified opportunities to turn downtown Bertram into a destination for out-of-towners and a lively gathering space for locals. They offered recommendations to make Main Street more visible from–and better connected to–the highway, to improve the streetscape and public realm along the primary commercial corridor, and to activate vacant and underutilized sites. Ultimately, the study reenvisioned Bertram’s Main Street as a vibrant, economically viable public realm that would support walkability and pedestrian commerce. 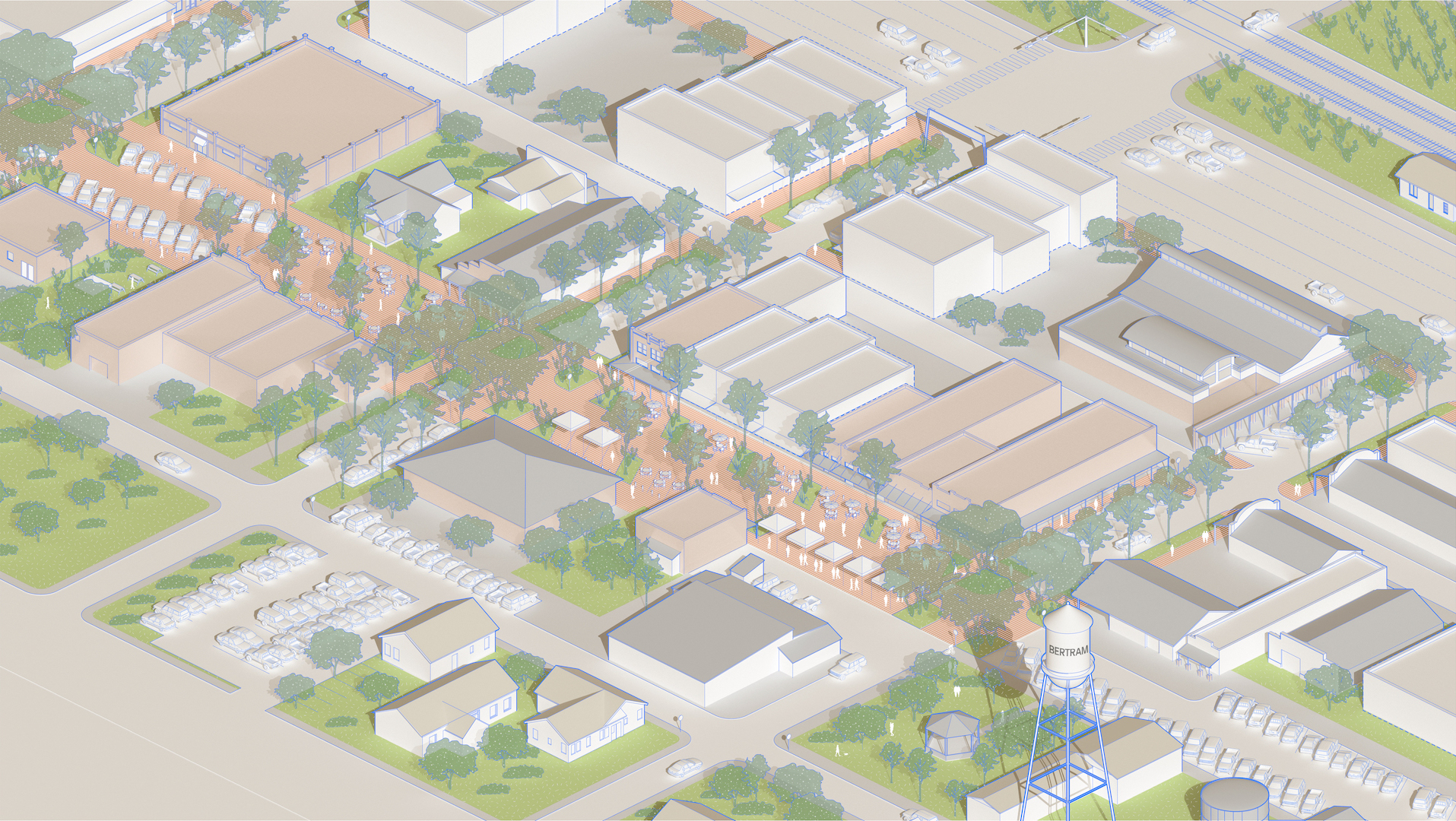 Bertram is the quintessential small Texas town, off the beaten path and rich in cultural offerings. In addition to its historic Globe Theater, the city runs a steam train to Austin and back, and is home to crowd-drawing events like its annual Art, Herb, and Wine Festival. It's exactly the kind of place Texans seek when they venture into the Hill Country.

Still, to get off the beaten path, drivers sometimes need prompting, and lack of visibility and connectivity to Main Street presented a substantial obstacle to Bertram’s ability to attract visitors. As part of their planning study, Plural and Dept. envisioned standardized, branded signage, variations in paving, and a decrease in speed limit upon entering city limits to make drivers slow down and become aware of their surroundings when they reached the city. The team took stock of every street that ran from Main Street to the highway and identified which among them would make for an ideal formal gateway–a place where pedestrians could safely cross the highway and enter the city, confident that they had arrived.

Once visitors entered downtown, they would want to enjoy the experience of walking between establishments and open spaces. To that end, the team outlined plans for better defining the boundary where the street ends and pedestrian space begins, thereby encouraging more walking, and increasing safety and mobility for those not traveling by car. Among other strategies, they described how adding planters, trees, overhangs, and spaces for businesses to spill out would all aid in fostering a consistent public realm. Finally, the team envisioned possibilities for underutilized land and buildings. These gaps in the pedestrian experience presented possibilities for contextual development, public amenities, retail and restaurant overflow, and festival use. Semi-permanent seating in a vacant lot, they hoped, could suggest a lively restaurant patio. A pop-up gallery in an unused building could catalyze a permanent display of Hill Country art. In this way, the team identified the sites around town that would be essential to establishing key corners and thresholds, and infilling the street wall in the downtown area.

On March 22, 2022, Plural and Dept. met with several members of the city government, the Economic Development Corporation, and the Bertram community to learn about the challenges and priorities for the downtown area from various Bertram stakeholders. The team presented a brief analysis of existing conditions, including research on pedestrian and vehicular connectivity, streetscape activity, and underutilized land, and solicited feedback and markups from the stakeholders. It was a productive meeting of minds, one that Plural hopes will pave the way for redevelopment in Bertram. As for the collaborative efforts to develop the planning study that resulted, Plural was proud to partner with Dept. and overjoyed to deepen a friendship along the way.

The City of Bertram