Plural’s favorite neighborhood pub is back! Hi Hat Public House has returned sleeker and better prepared to serve up tunes alongside its offering of spirits and fine cuisine. The once white ceiling has been painted black. Plush bench seating follows the lengths of the east and north walls. The curve of the bartop, made of manufactured quartz, mirrors a dropped soffit lined with thin walnut slats overhead. Wide flatscreens–one behind the bar, and another in the dining area–make this pub an ideal spot to catch a cult film or a game when you’re out for a stroll on Austin’s East Side. 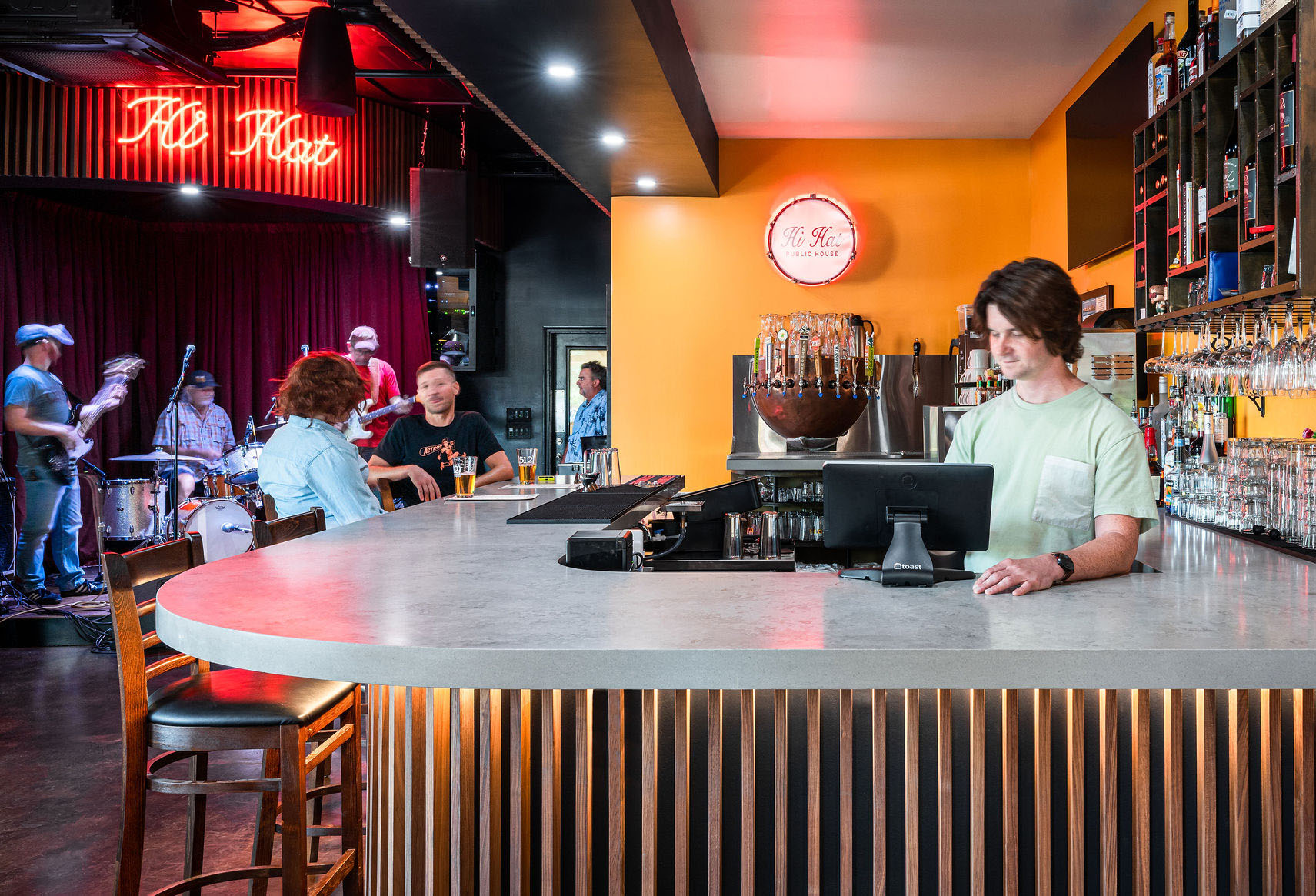 The start of 2021 was tough. To add to the trials of quarantine restrictions, which by then had been in place for almost a year, February brought a snowpocalypse that knocked out Austin’s power for a week. In the aftermath, water poured from a fire riser and flooded Hi Hat’s interior, putting the restaurant out of commission for nearly a year and a half. But the pub’s recent reopening, paired with Plural’s redesign, stands as a testament to how far the city has come in that time.

What hasn’t changed is the music, which remains the heart of the establishment. Toms, snares, and even a kick–all manners of individual drums from a kit–serve as light fixtures above the tables. Behind the bar, beer flows from an old timpani, once a key player in the New Mexico State marching band, now affixed with beer taps.

But the stage is where the music really happens. In the southeast corner, what was nothing more than a modest lift from the floor has become an elevated platform, backed by a red curtain, beneath the cursive flair of Hi Hat’s logo illuminated in neon upon a soffit overhead.

That stage is the domain of owner and drummer Steve Schrader and his band. Then known as the New Texicans, they formed in New Mexico and moved to Austin 30 years ago, playing South by Southwest when it hosted a modest 200 acts. Now they’re the Hi Hat House Band, keeping the musical spirit of the East Side alive, answering the call to play when it comes, and setting the tone for Hi Hat’s signature jazz brunches.